Passages: Turks & Caicos to the DR!

Down the ‘Thorny’ path we go! It’s a rite of passage for any cruiser making their way to the Caribbean, and this particular passage is considered the roughest leg of the journey due to harsh seas and the wind generally coming from the wrong direction. Not gonna lie, knowing this made leaving our comfy cozy marina superrr hard! For the past two weeks we were living it up as tourists with hot showers, A/C, WiFi, and a rental car! It was glorious 🙂

Our weather window aligned perfectly with Cap’n Dons arrival into Provo. However, the weather forecast wasn’t that great. The wind and swell have been out of control and lately we’ve been doing very little island hopping and more overnight passages since there is more distance to cover resulting in longer hours at sea. We had a very small opening so it was time to go! We topped off our fuel and left the marina (at high tide) to stage up at Sapodilla bay. Where we triple checked our route, Chris Parkers emails, and weather apps.

DAY 1: After a rolley nights sleep we left at sunrise with three other boats and crossed the shallow TCI bank over to Six Hills Cay (40 miles). I got excited when I heard “TCI bank” because it reminded me of our amazing time on the Great Bahama Bank. Where it was calm, relaxing, and we just kicked back with the autopilot on…not the case here. 2-3 ft wind chop! We were pointed right into the wind just taking a beating while trying to dodge sand bars and coral heads for 7 hours. It was a salty day for sure and after two weeks of not moving, yup, that sure snapped us back into reality. #boatlife 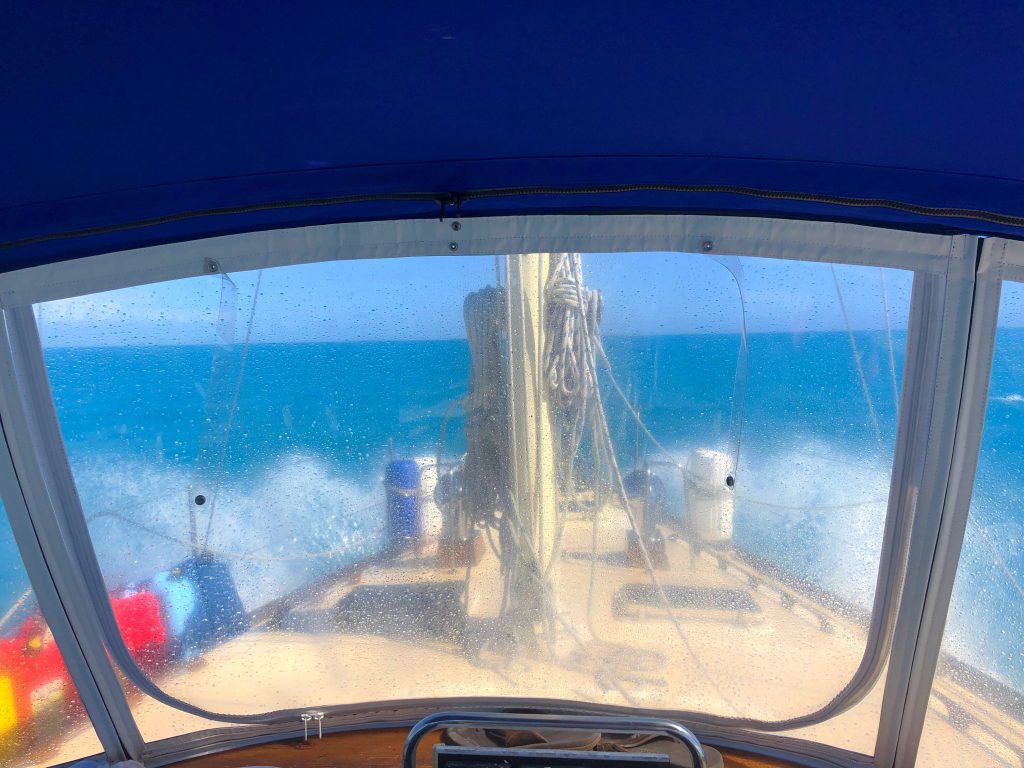 Toe rails getting a good rinse 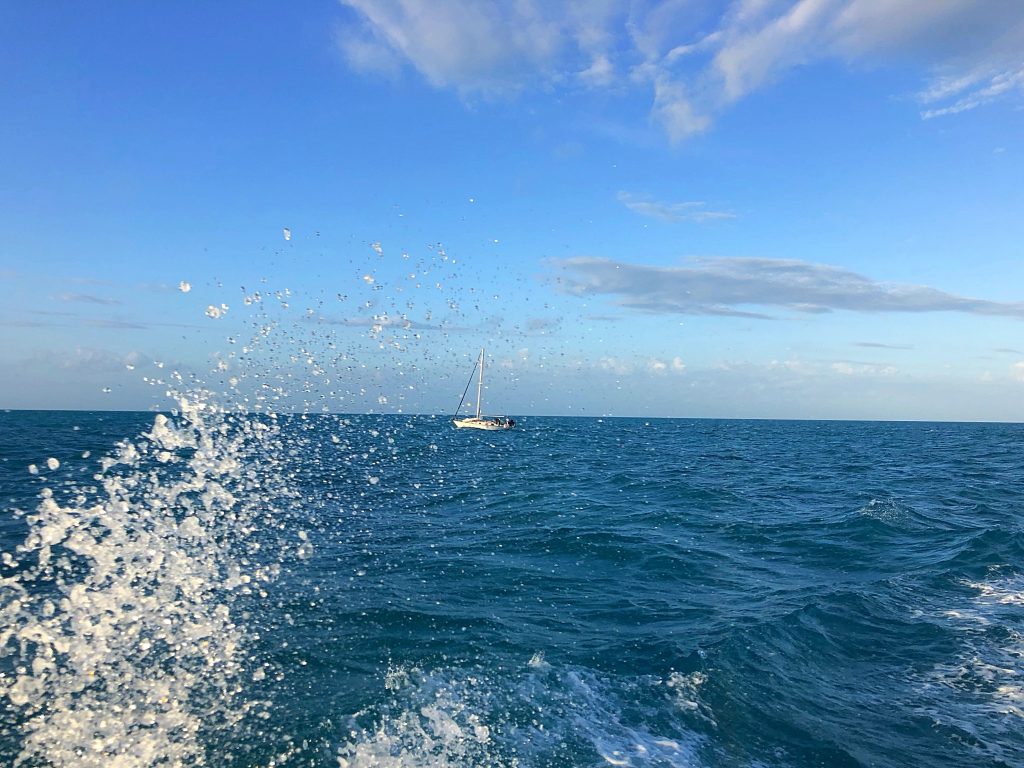 Side note: If you haven’t read Bruce Van Sants book the Thornless Path you should! NOW. Van Sant, the author has repeatedly surveyed nearly 200 anchorages between Florida and South America and racked up over 80,000 miles doing it. So yeah, this guy (arrogantly) knows his stuff! And has been a huge influence on our journey South. Grateful for his wealth of knowledge!

Arriving into Six Hills Cay was beautiful, the water was so calm and blue. Wind direction was just right so we were happy to have less rollies than Sapodilla. As soon as we anchored a giant stingray in the distance came swimming up to us and around the boat. We spent the rest of the afternoon/evening in total relaxation mode as we mentally and physically prepared for our 107 NM overnight to Luperón, Dominican Republic! 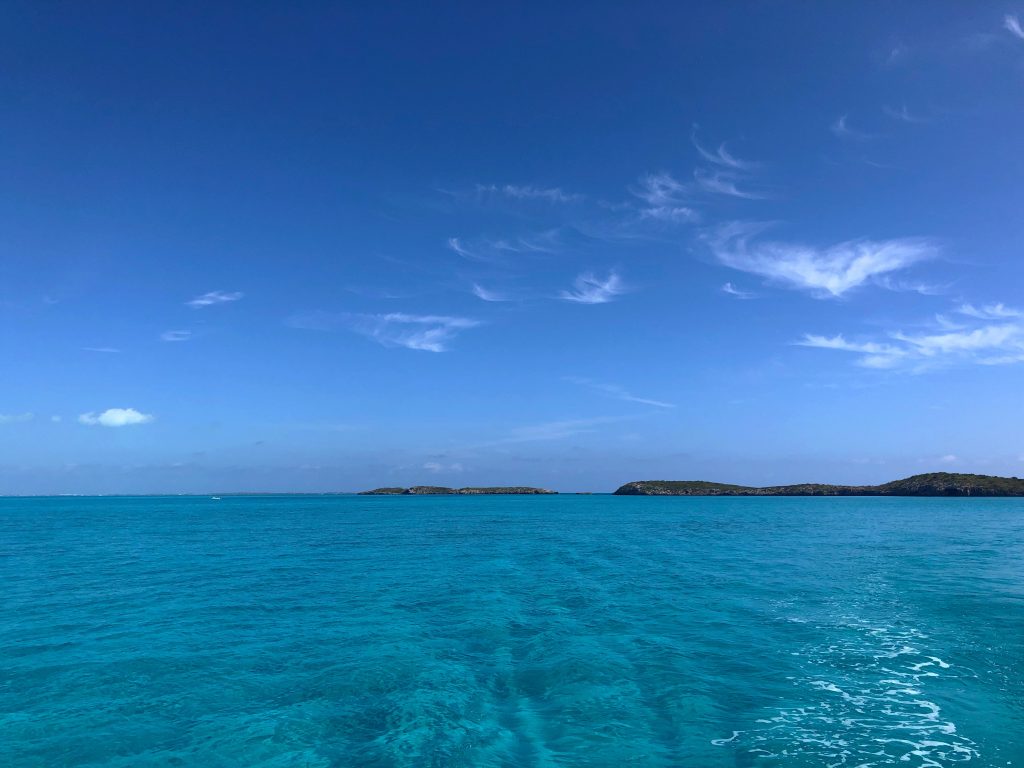 DAY 2: (Valentine’s Day) We enjoyed a late brunch at Six Hills Cay, and at 2:30pm pulled up anchor and got underway to the DR. There wasn’t any opportunities to sail so we motored the entire 107 NM. We weren’t anticipating much excitement but what an incredible day. We were able to get 3 fishing lines out and the guys hooked all 3 but reeled in TWO Blackfin Tunas! Exciting! Topped off by a gorgeous sunset with humpback whales! It was really awesome having Cap’n Don on this leg with us! He also cleaned, filleted, and put our tunas on ice while underway – such a pro!

By nightfall, we hoped the winds would have died down but that didn’t happen, the seas were actually worse than during the day. You could no longer see the size of the swell, but holy shit could you feel it. We spent the next 12 hours getting our ass’s kicked. The guys switch on/off for some sleep, but I hate leaving the cockpit for fear of getting sick, so I stayed put and unfortunately didn’t really sleep at all. I struggle with sleeping on overnights and I’ll admit at one point I’m pretty sure I was hallucinating. I had this moment where I could smell BBQ and thought we were going to eat it. LOL! Thats when I was like Ok time to stretch and hydrate. That was rough.

DAY 3: Land ho! We arrived at 5:15am and had no choice but to circle outside of the harbour as we waited for the sun to rise before entering Luperón. It’s best to plan your arrival just after sunrise to take advantage of the calming effect the island has on the winds and seas. Even then we still experienced some swell before entering the marked channel but once we did it was a huge relief after 17 hours of being inside a washing machine.

As you get closer to land and the morning light appears it’s so neat seeing the outlines of the green mountainous island. Completely different landscape than we’ve been use to seeing in the Bahamas. There was a little bit of fog hovering and then it quickly cleared as the sun came up, I’ll never forget the feeling of my eyes adjusting to the pretty pink and orange hues. TCI was strict on notifying authorities of your arrival so before entering the channel we tried calling (3x) for the Comandantes clearance but received no response so we entered anyway and grabbed one of Papo’s mooring balls. Then made our way into town for check-in. 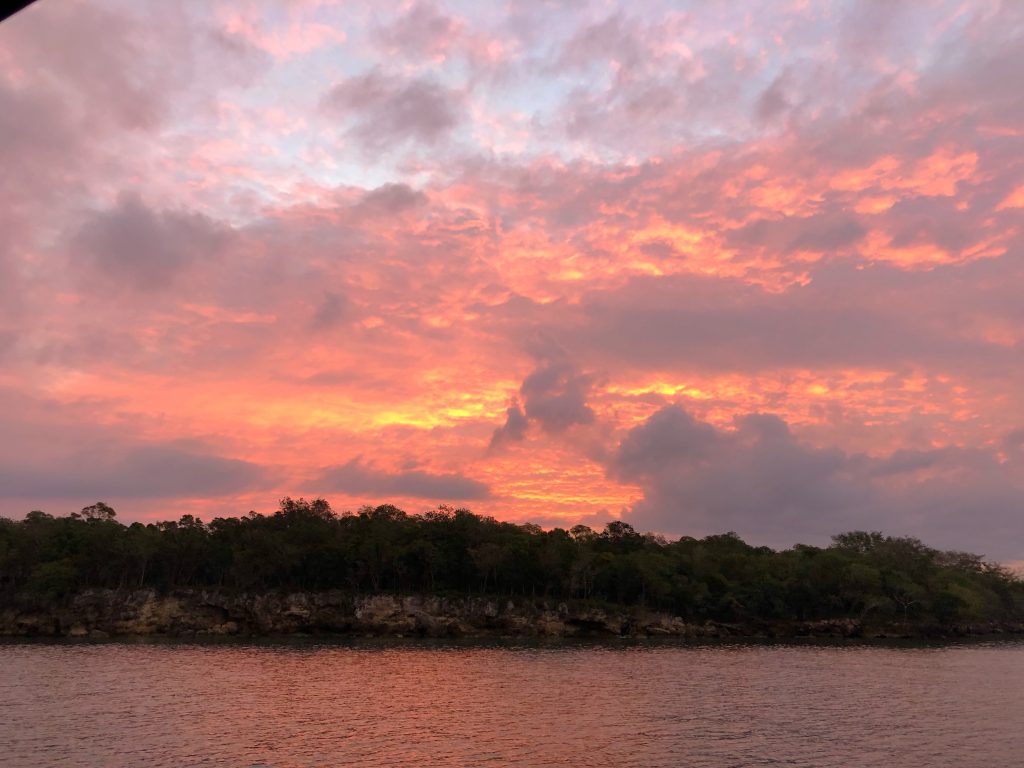 LOTS more on our time in the DR coming soon! 🙂

Cheers from the Caribbean!

I was almost getting sea sick reading this & wished for you to really have had BBQ!

Haha, Thanks Michele! Soooo glad to have that passage behind us.